Gearing Up for Another Fly Tying Season 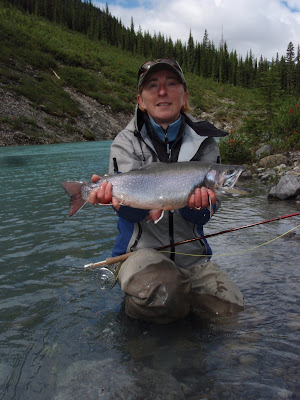 A trophy brook trout Karen caught at the Wood River that flows out of Fortress Lake, B.C. (caught with a size 12 Flashback). 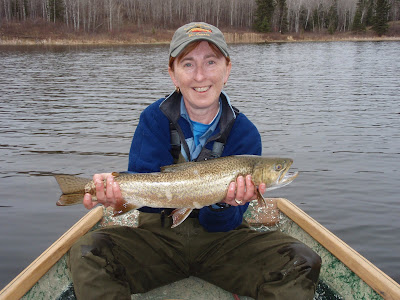 A beauty of a Tiger Trout (cross between a brook trout and a brown trout) caught at Twin Lake (just outside of Roblin), Manitoba during the May long weekend 2008 ( caught with a size 14 black and red ice cream cone chronomid).
Hi Everybody!
I have had several inquiries about when the Central Alberta Fly Tyers start up again. We will kick off the tying season on Monday December 1, 2008. We will again run the tying sessions on Monday night from 7 to 9 P.M.
...I would love to see us continue to get as many different presenters as possible again this year. That way we learn from each other and the work load is spread out amongst us all.
Jeremy Davies has contacted me and he is interested in doing an evening presentation this year. His session will have an additional fee to cover his presentation and travel. Jeremy is the inventor of the "evil weevil" and many of his patterns can be found here:
http://www.danica.com/flytier/jdavies/jdavies.htm
I would like each presenter to gather their own materials for their tying/teaching session. They should plan for about 25 flytiers although we do occassionally get a few more. The participants of each session will pay $3.00 each. The presenters will then be reimbursed for all their expenses.
I would appreciate presenters from past tying sessions and any individual who would be willing to run a tying session to e-mail me with a date in mind. I will be contacting presenters from the last two years by e-mail.
By the way I would love to post any pictures you would like to share from your fishing season. Please e-mail them to me! I will post them up on the blog.
bvanderwater@rdpsd.ab.ca
Finally, I know that the Central Alberta Chapter of Trout Unlimited is making a concerted effort to get back up and running in the community. I would encourage you to become a member of Central Alberta Trout Unlimited. I suspect that an AGM will be coming soon. I will keep you up to date of their activities.
The fly fishing season is starting to slow. Some lakes will close for the season after this weekend (Fiesta, Ironside). Our Eastern slopes rivers close for the season on October 31.
Bob
Tentative Dates
December 1 Bob Vanderwater (slide show from Twin Lakes, Manitoba: Tiger Trout) fly patterns for Tiger Trout (they are excellent patterns in Central Alberta too!)
December 8 Evan Ritchie
December 15 Dr. Bill Young
Christmas
January 5 Doug Cook
January 10 (this is an all day session with Phil Rowley) Theme: nymphs
January 12 Bob Vanderwater
January 19 Dave Jensen
January 26 Roy Saunders/Jock MacKenzie
February 2 Don Andersen (chronomids for lakes and rivers)
February 9 Doug Pullen (steelhead extravaganza)
February 16 (Family Day- no session)
February 27
March 2
March 9
March 16
Posted by Central Alberta Fly Tying at 4:02 PM

good info. Thanks for sharing B-man.