Walleye on the Fly along the Red Deer River

It is time to leave the brown trout alone on the Red Deer River. They are spawning in the next short while. Walleye have dominated the Red Deer River in the last few years and they are very willing the strike a minnow fly pattern. Larry and I knew of an excellent spot below the Dickson Dam to cast to walleye. Today they were there and very active. The mercury was close to zero when we arrived but the walleye struck at our blue clouser minnows. Larry used a sink tip line and I used a spey rod with an intermediate tip. Some of the hits were gentle taps but other takes were unmistakeable! The nice thing about fishing below the Dickson Dam is you are protected by wind and the area can be a bit of a "heat sink" if the sun is shining! We caught mostly walleye in the 2 pound range although we did tangle with some larger specimens! The Red Deer River below the dam is well worth a visit. Do be aware of potential spawning redds and do not walk over them. 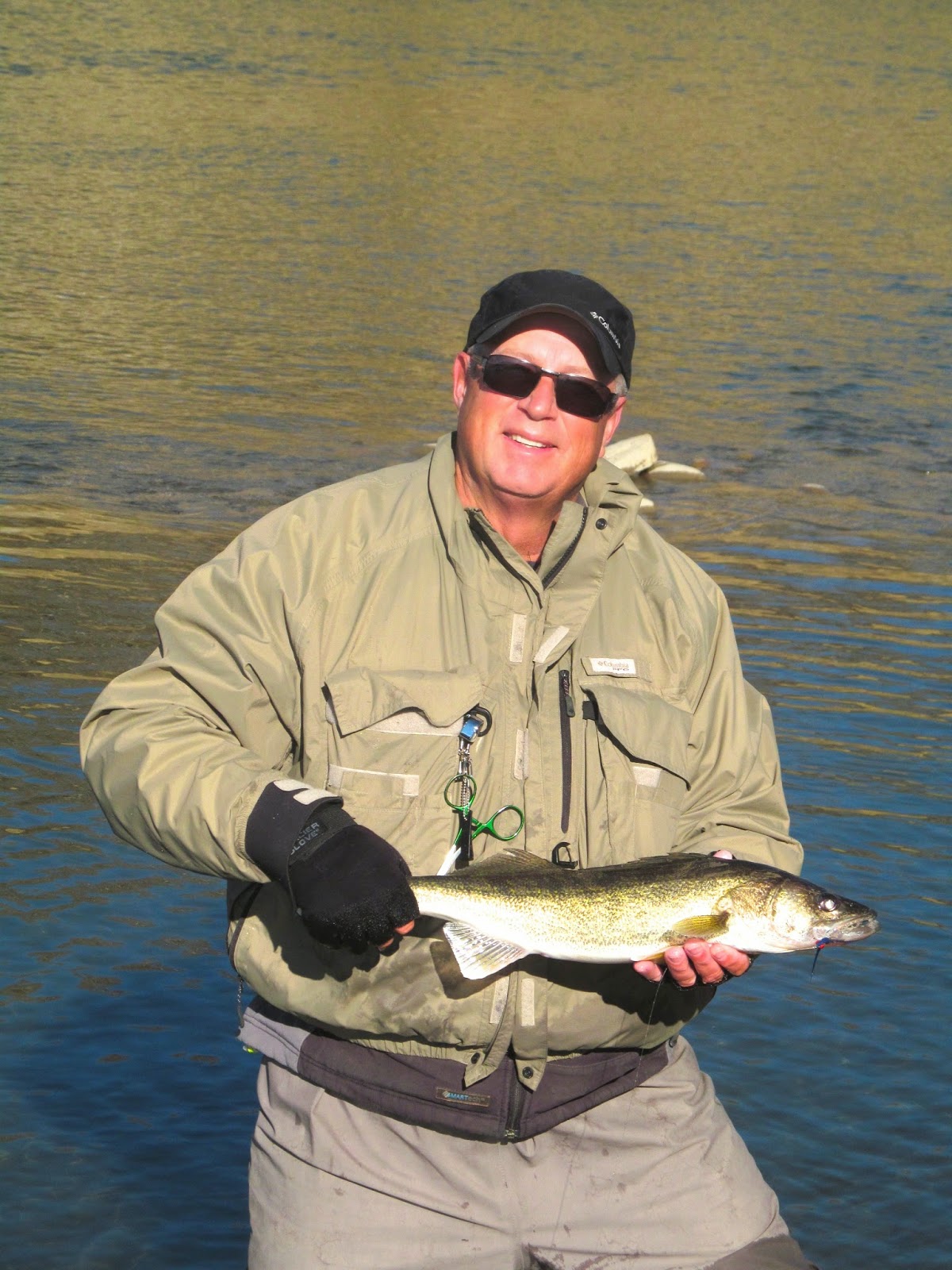 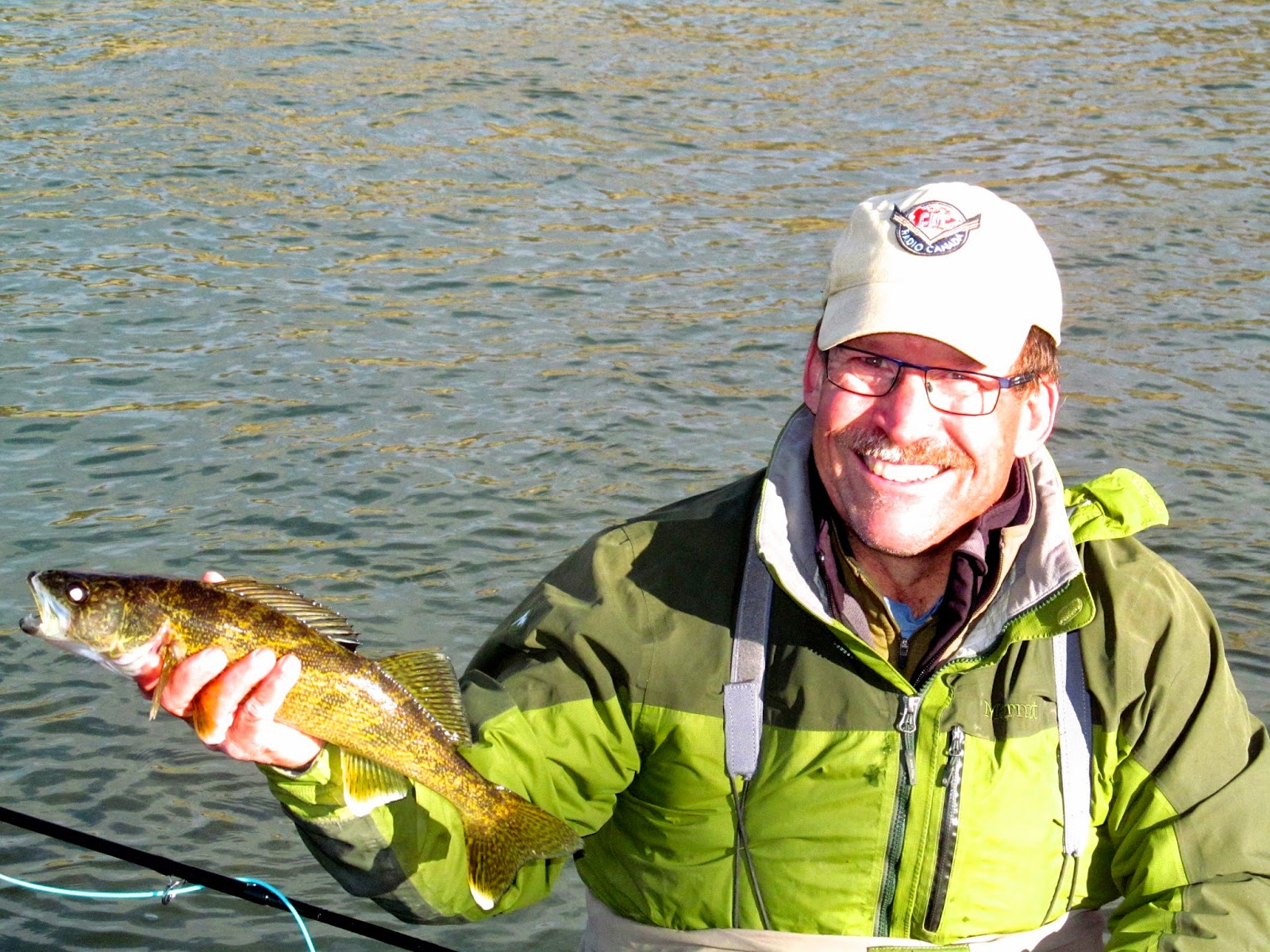 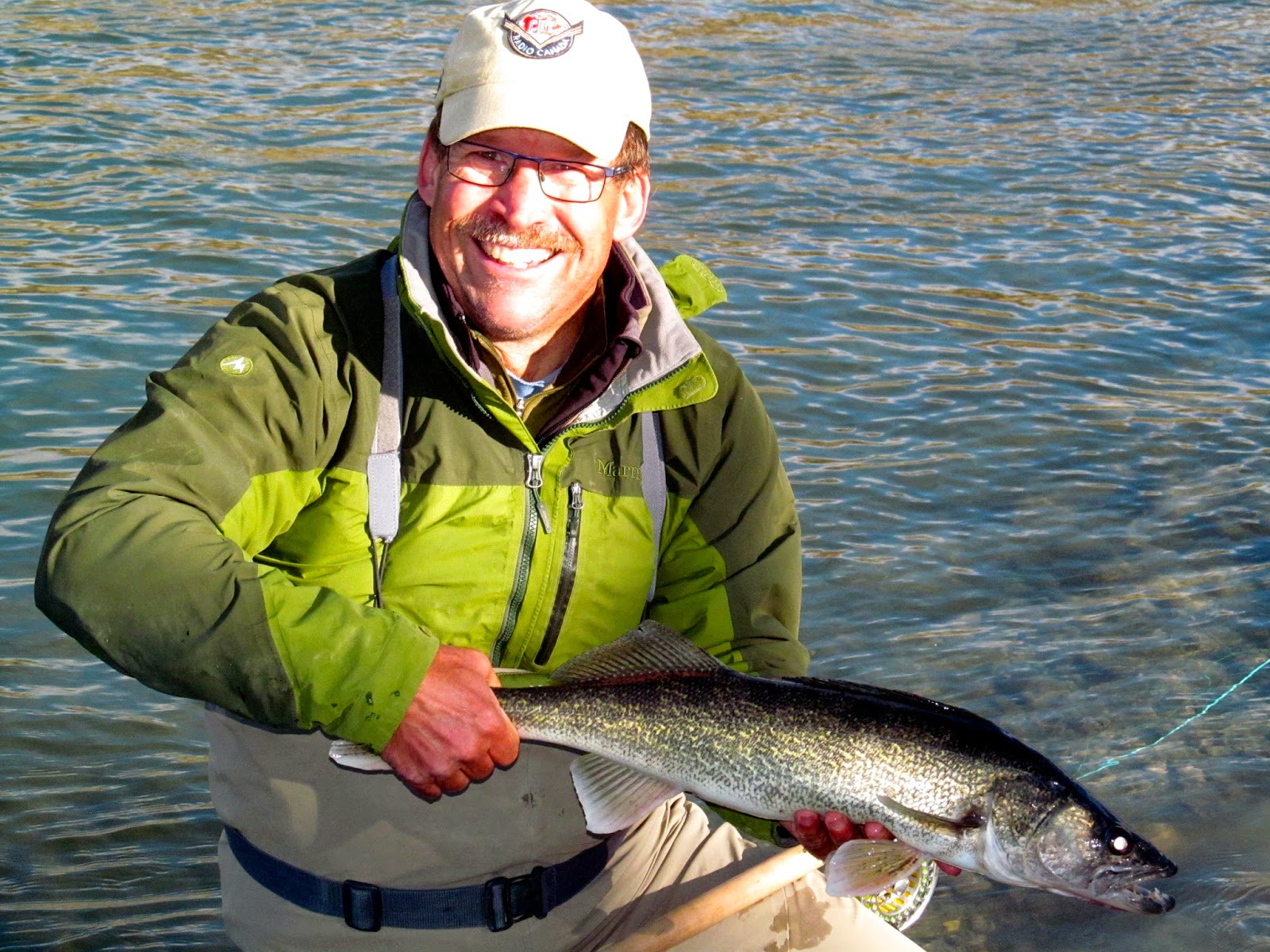 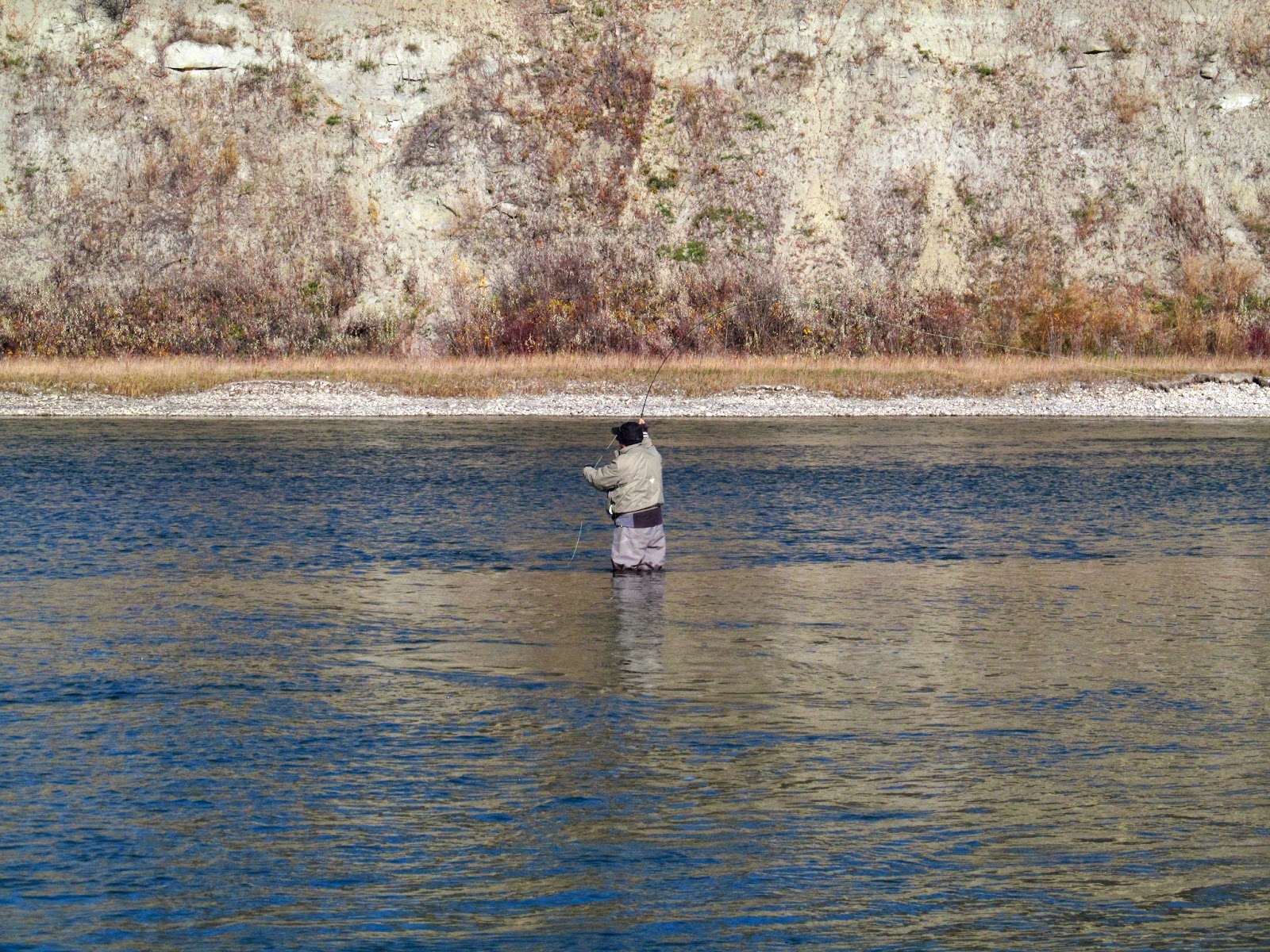 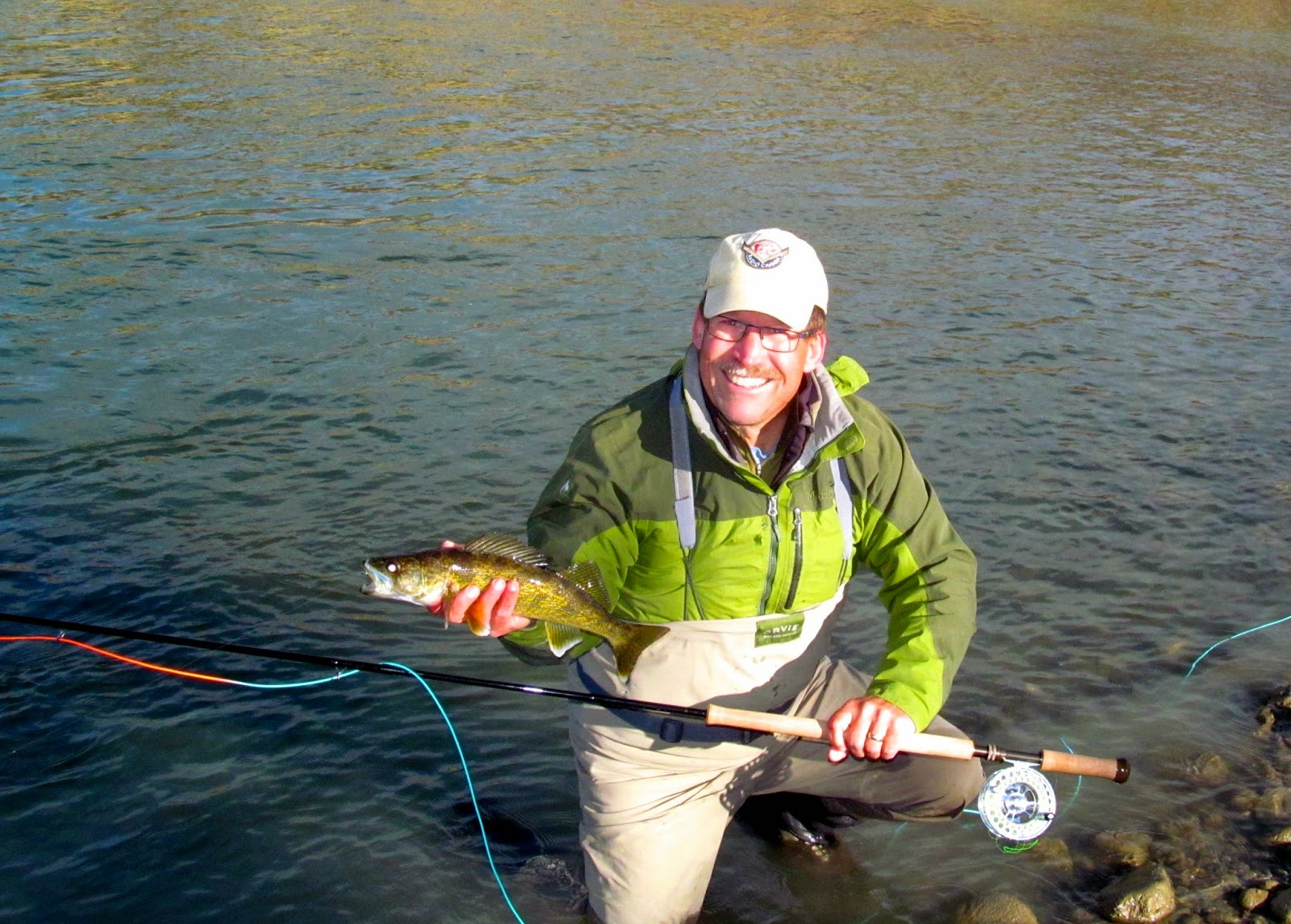 Posted by Bob Vanderwater at 4:53 PM No comments:

Steelheading is All About Perseverence 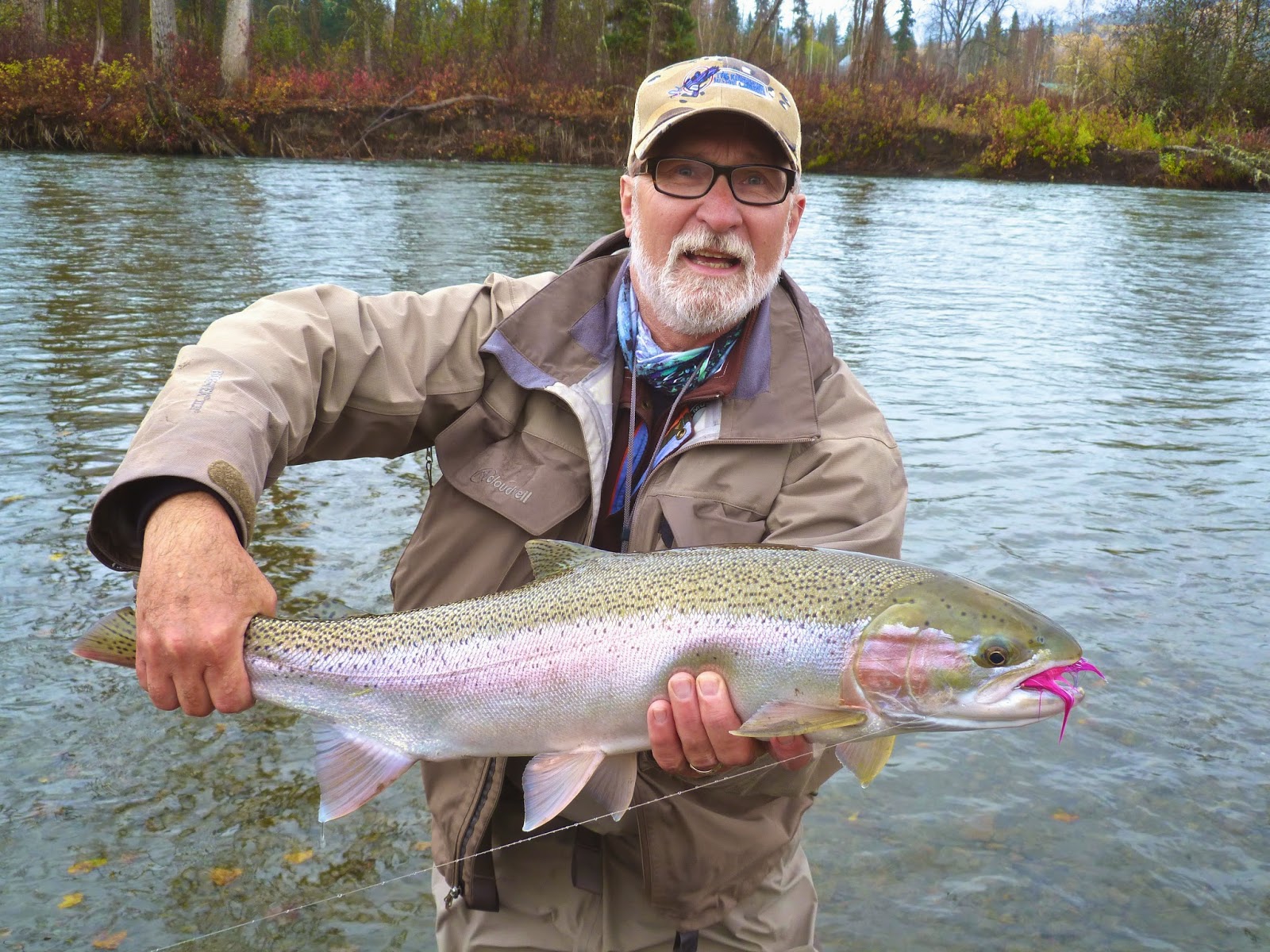 Doug Pullen and his Brother-In-Law just got back from 9 days of chasing steelhead along the Bulkley, Morice, Kispoix and Skeena Rivers.  It was cold and wet as it rained almost every day.  Doug and his Brother-In-Law had to move around quite a bit due to some rivers being blown out with rising waters. The guys had a two person inflatable boat so they could fish from a variety of locations. You can’t fish from a boat so the boat only took them from place to place. You always had to be looking over your shoulder for either bears looking for their next meal (steelhead fishermen are a tastey meal) or large trees that were drifting down due to the large amount of rainfall. Doug fished 6 long days before he hooked his first fish, 18 lbs of pure adrenalin . After 9 days of fishing, 3 hook-ups, 1 fish to the hand and 1 bottle of scotch, in other words a pretty good steelhead trip. 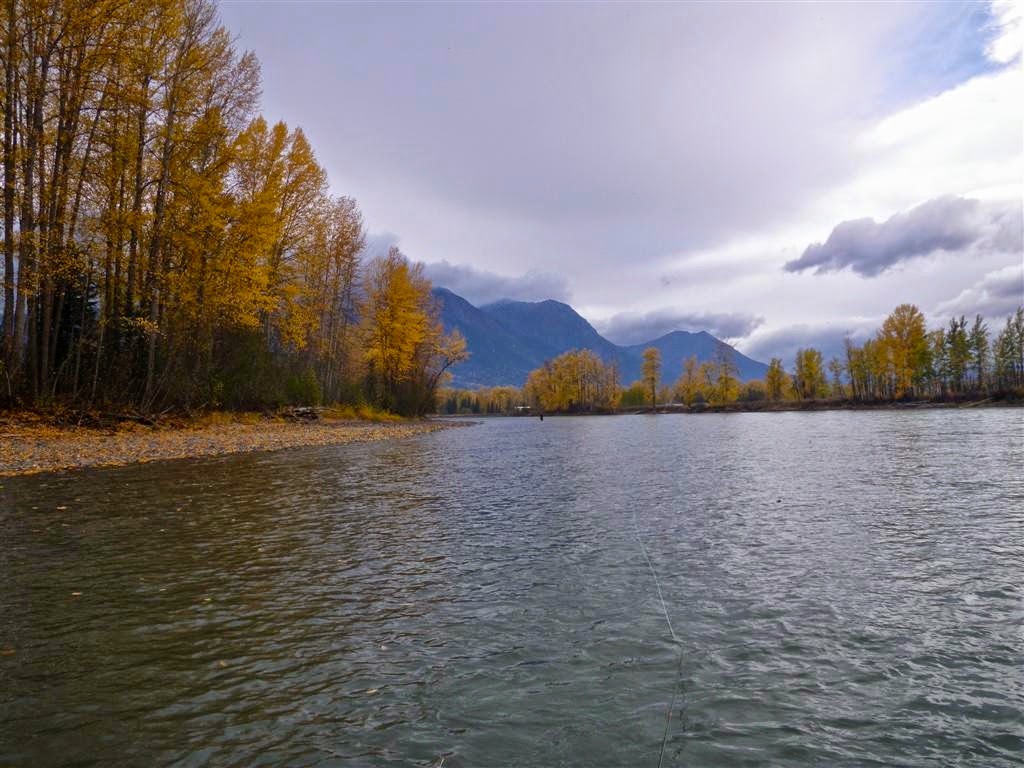 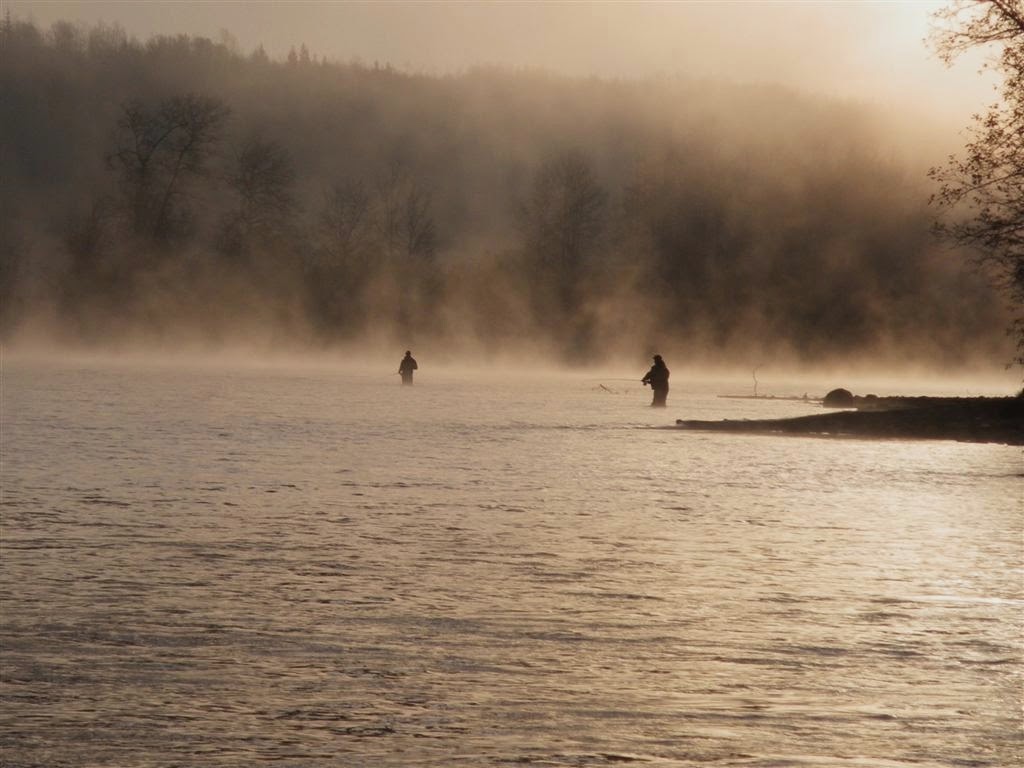 Posted by Bob Vanderwater at 7:43 PM No comments: 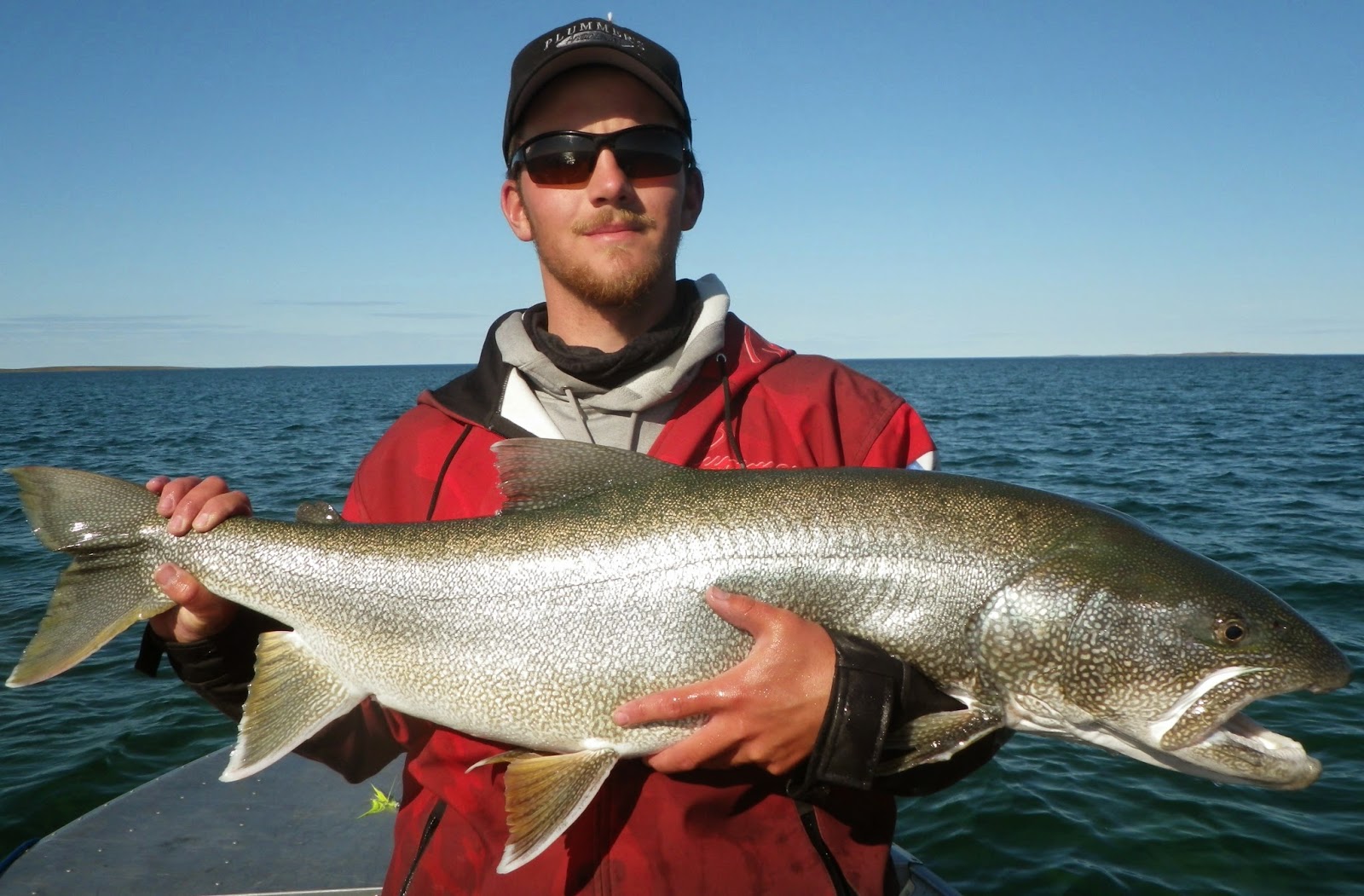 When you think of Great Bear Lake and fishing for lake trout, fly fishing probably isn't the first thing that comes to mind.  Trolling with spoons, flatfish, or jigging deep structure is what you would normally expect to target Lakers with.  Trolling is so popular because these fish are so curious and love to follow a lure for great distances and it can be a challenge to cast a fly and entice a strike within casting distance.  Starting last season I had a week dedicated to just fly fishing and ended up combining trolling technique with fly gear; as well as lining up drifts across points and reefs that you could cast to and pull Lakers off at will.  This season I got three whole weeks of fly fishing in on the Bear and wow was it incredible.  A few things I noticed and observed in general about the lake is how sensitive these fish are to temperature, pressure, and how tightly they hold to structure.  Keeping this in mind we also caught fish in water temperatures so low that it would make you shake your head and say to yourself what is this fish doing all the way out here.

As the season progresses you see a gradual shift or using this season as an example a very quick shift of fish moving from the shallow bays where the water is warmer at the beginning of the season during ice out, to being spread out throughout the lake, and then finally migrating back to the reefs at the end of the season in preparation for the spawning period.  For fly fishing I want to target these fish preferably when they're in shallow water and I can work the structure they are holding on.  If it's more in the middle of the season when the fish typically spread out, you have to hunt for them.  I took notes on nearly every fish I caught this season pertaining to depth, water temperature, weather, barometer reading, technique used, and species caught.  After looking at this shambled mess of data I collected, I started to see a general pattern but the most important piece of info I collected was at the end of the day. These fish and just the lake in general are extremely unpredictable.  Moving from place to place quickly and efficiently is something I found very successful this season.  That's not to say however that if you don't catch fish in the first five minutes that they aren't there, everything in moderation.  Commit to the spot you're fishing and work it thoroughly, every piece of water has information you can gather from it to make your day better.  With the right info regarding technique we needed the right gear.
My setup was a 9ft. 10wt. BVK series from temple fork with a large arbor BVK reel holding a full sink line running a 20lb leader straight from fly line to fly.  The reason for only a 20lb leader is that most fly lines aren't much heavier than that, typically between 20-30lb breaking strain. The crucial piece of gear here is the rod, it's absolutely necessary to have a stiff enough rod to control these fish as you fight them rather than the other way around.  I had a guest this season use an 11wt. Orvis and just the average Laker bent that thing in half when they dive for the bottom.  I can't even exaggerate how well these fish fight on the fly; it truly is a treat when they go on a run.  A good tip to remember when fighting these fish especially that trophy you are after is to keep them off the surface!  Unless you are going in to net the fish if they come up and are not ready, they go into the dreaded death roll and pop the fly out!  Feed them line while keeping tension, allow them to stay down so they don't feel the need to roll and also allows you to keep a good vertical angle on the fly and keep the fish hooked.

My fly box for Lakers has an assortment of deceivers in all the colors of the rainbow and articulated streamers tied in the same style for a larger bait profile.  The larger bait profile was very successful for targeting larger fish.  Most of the takes from lake trout are going to be from the rear of the fly because they end up following it for so long.  An interesting note was that the percentage of repeat strikes using flies versus hardware was huge.  Quite often if a Laker didn't take the fly the first time they would continue to follow and strike a second and in extreme cases a third time.   The largest fish I took in my boat on the fly this year was 36lbs. and on the last day of the season fishing directly on top of a reef in 5ft. of water.  The fight took us 22 minutes, and the fish went on numerous runs making that reel sing.  We managed the fish by honestly letting him do whatever he wanted all the while keeping constant tension and persuading him out to deeper water away from the reef.
All in all an experience I'll never forget when that fish ended up in the net and very rewarding to target these fish on the fly rod.  Fly fishing week at the lodge is something I look forward to every year and lets me enjoy my favorite style of fishing. 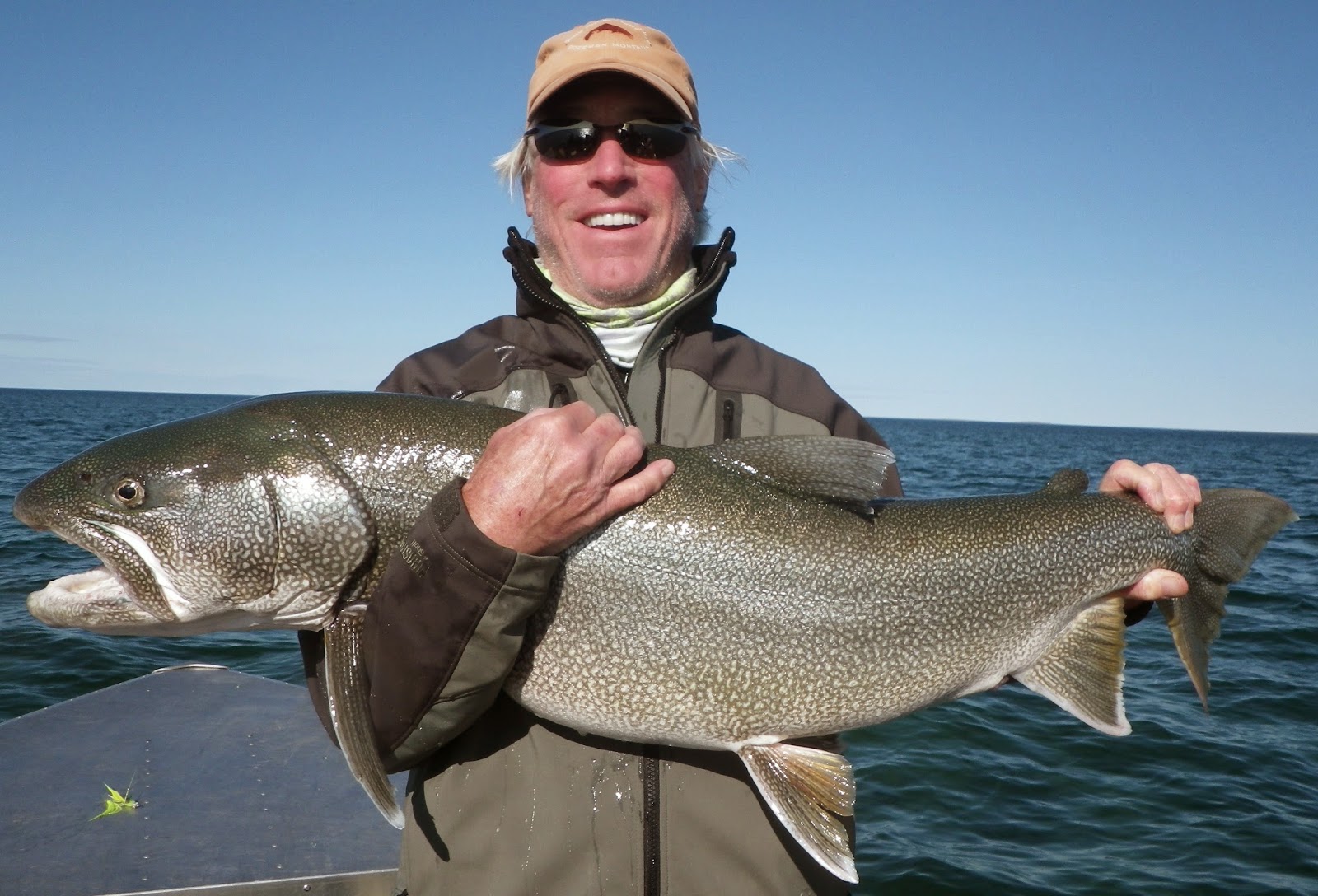 Posted by Bob Vanderwater at 9:47 AM No comments:

Posted by Bob Vanderwater at 10:43 AM No comments:

Betty and Steve just got back from one last camping trip. They stayed in the Cypress Hills and fished at Bullshead and Spruce Coulee. Steve and Betty tried twice to fish Michelle Reservoir but got blown off both times. Spruce Coulee had lots of small brookies and walleye. Betty caught her first walleye on the fly. Bullshead was very good to Betty and Steve, although it was windy, the fishing was excellent. Not much top water action at Bullshead but the rainbows loved boatmen and backswimmers below the surface. 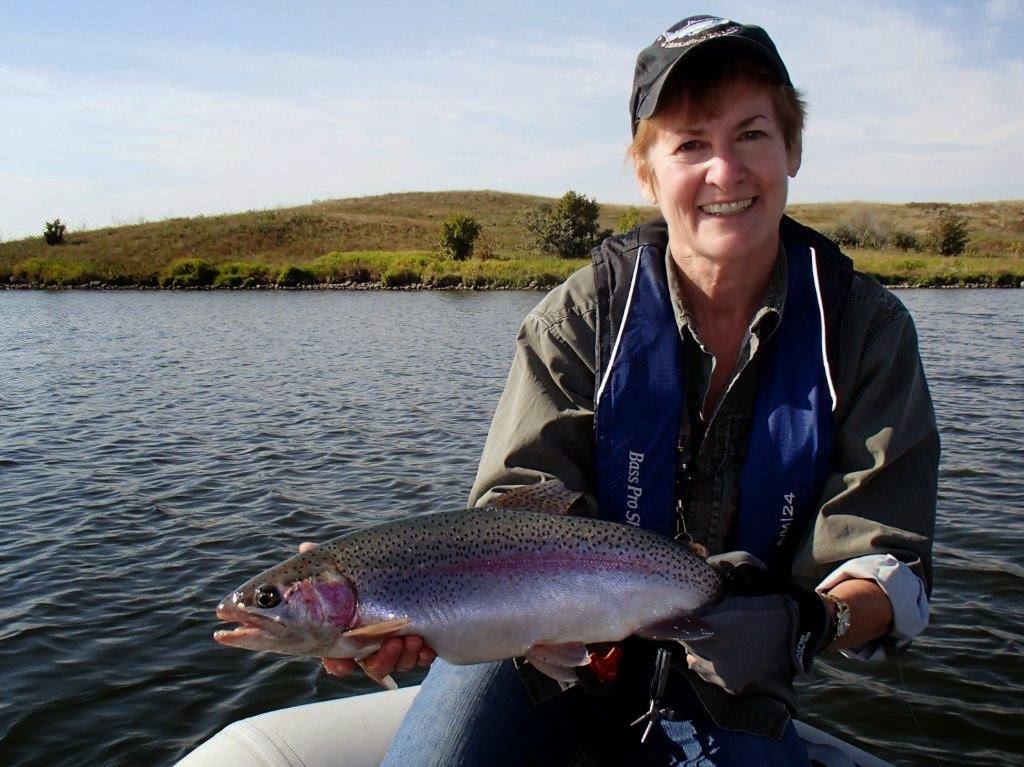 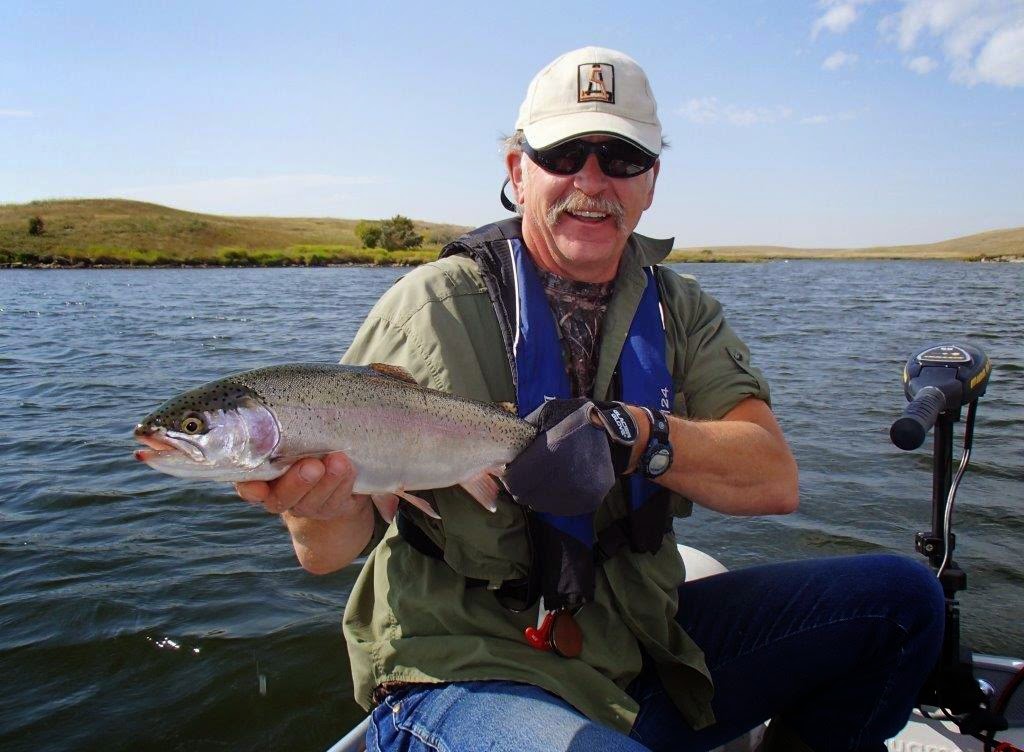 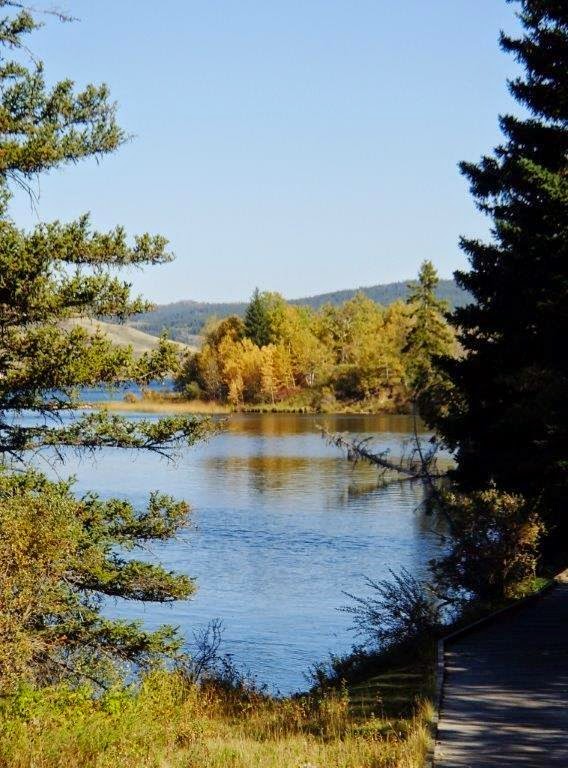 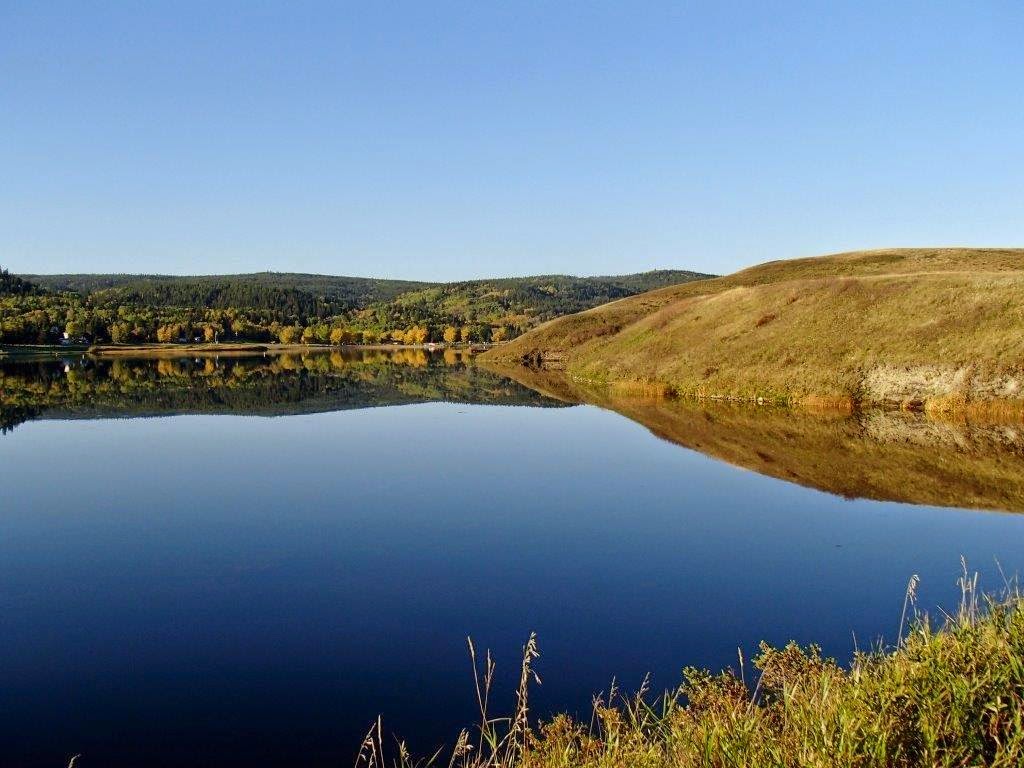 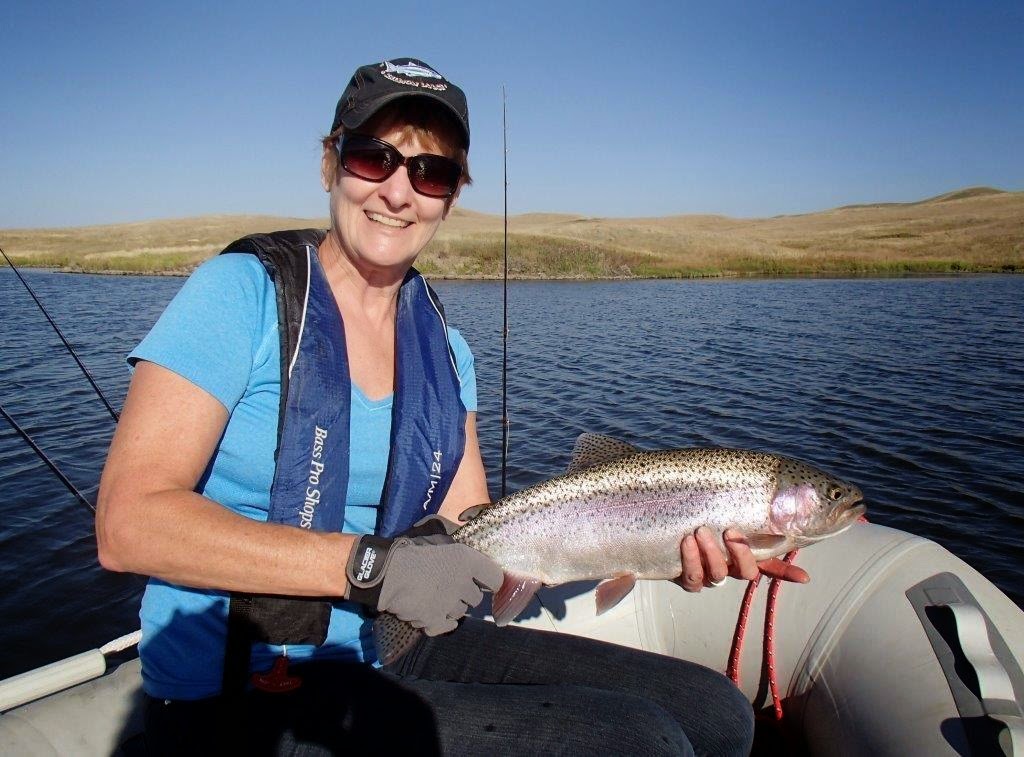 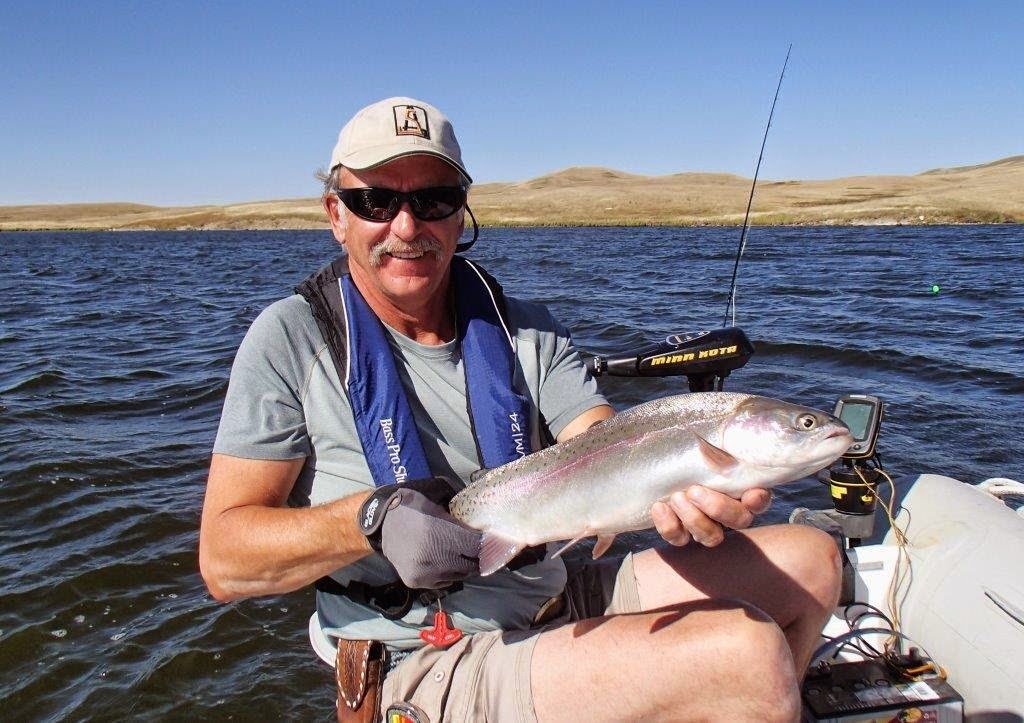 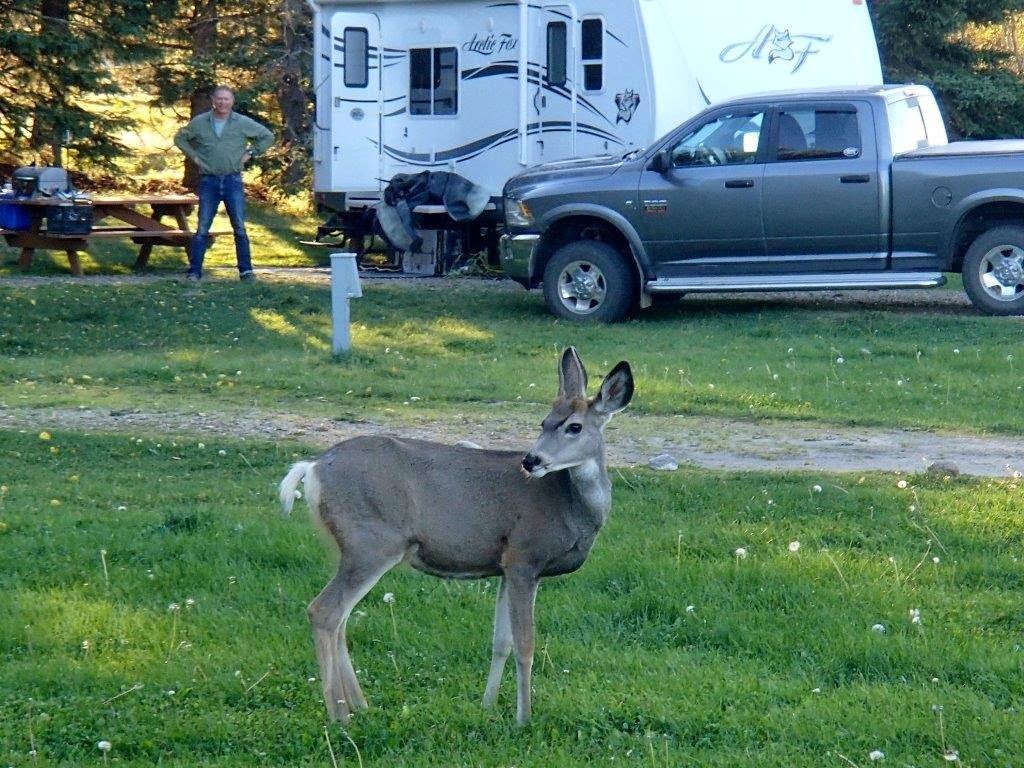 Posted by Bob Vanderwater at 5:03 PM No comments: 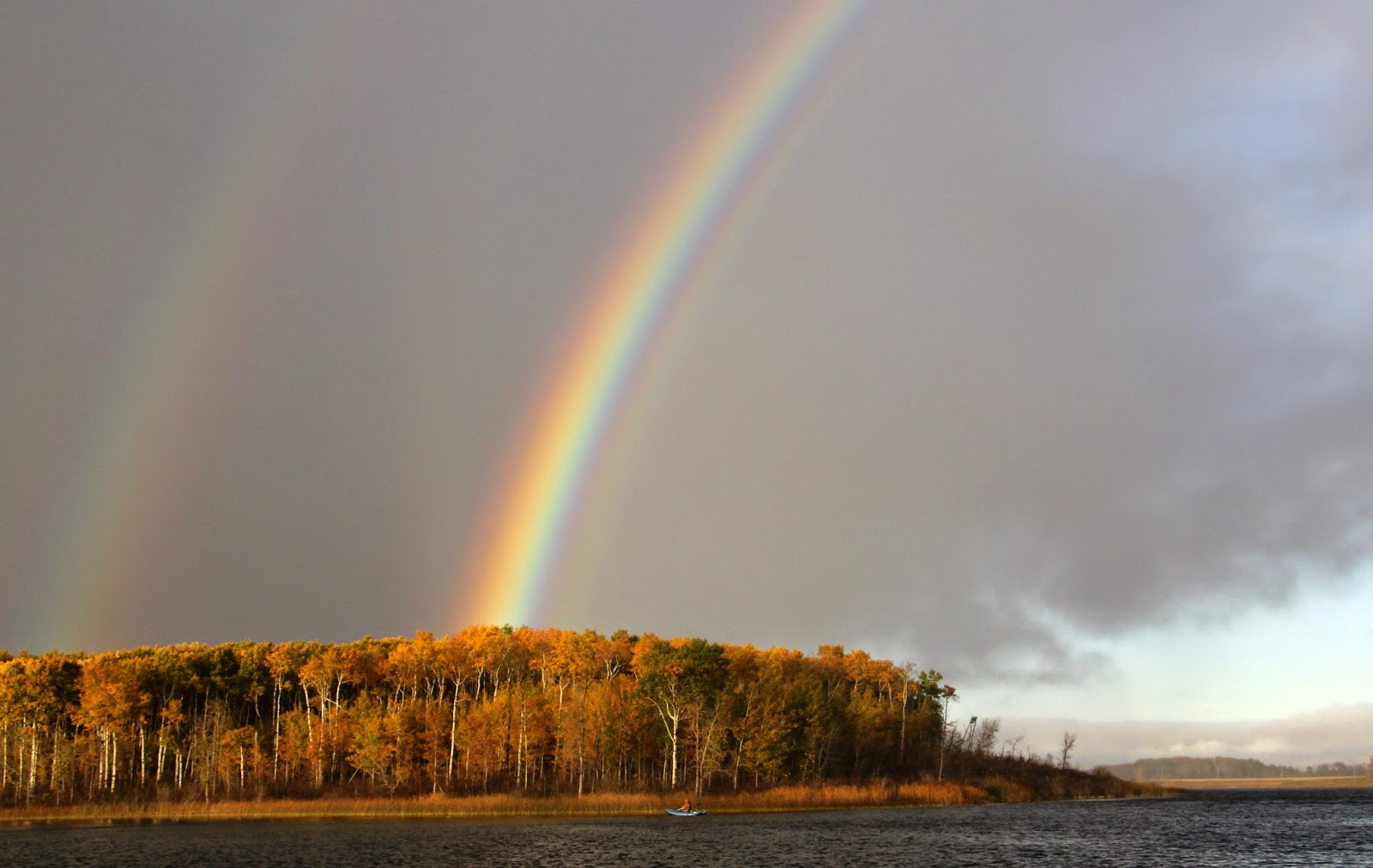 Several of us just got back from fly fishing in the Parkland Region of Manitoba! The brown trout were in their full autumn splendour. 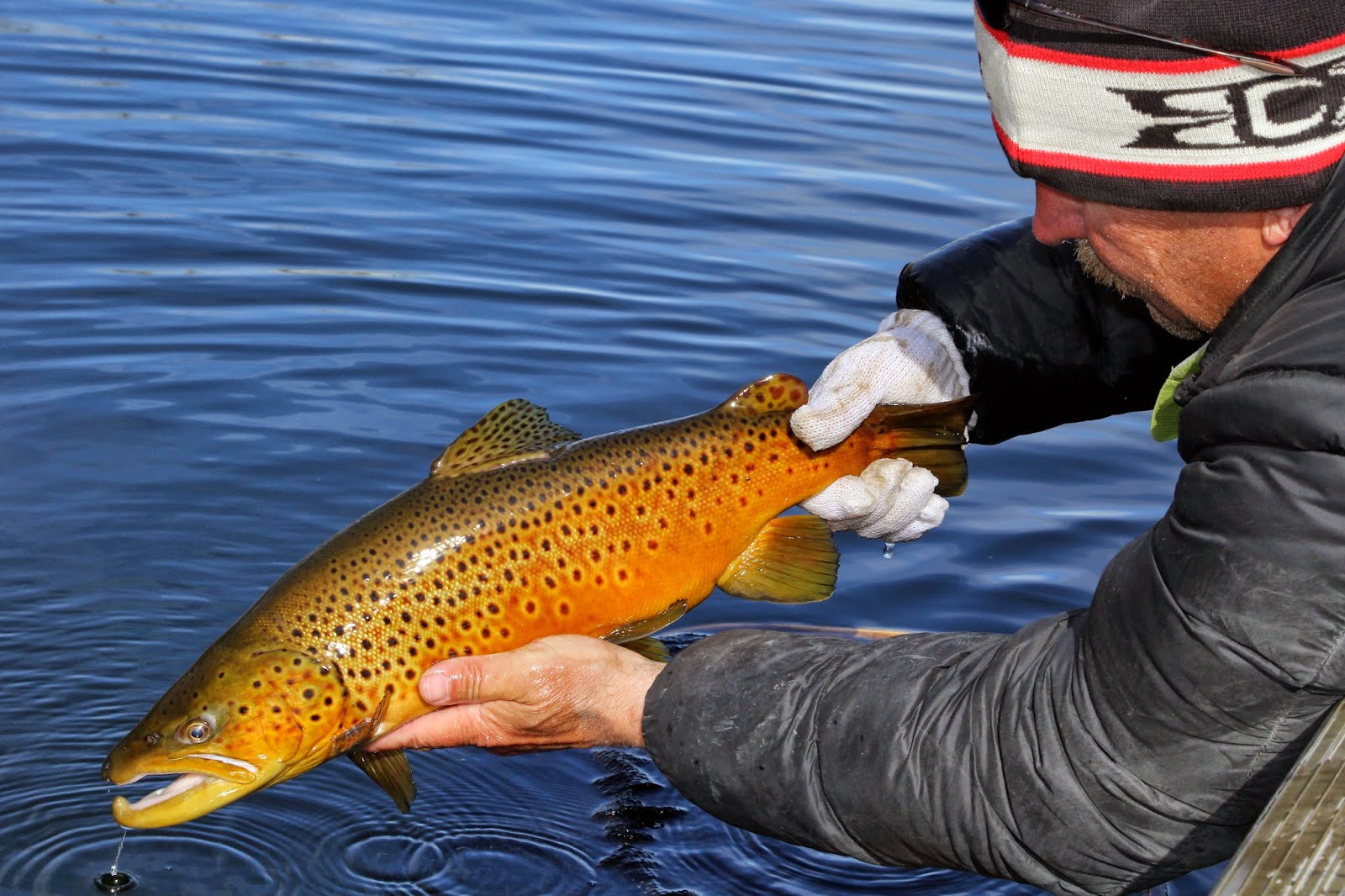 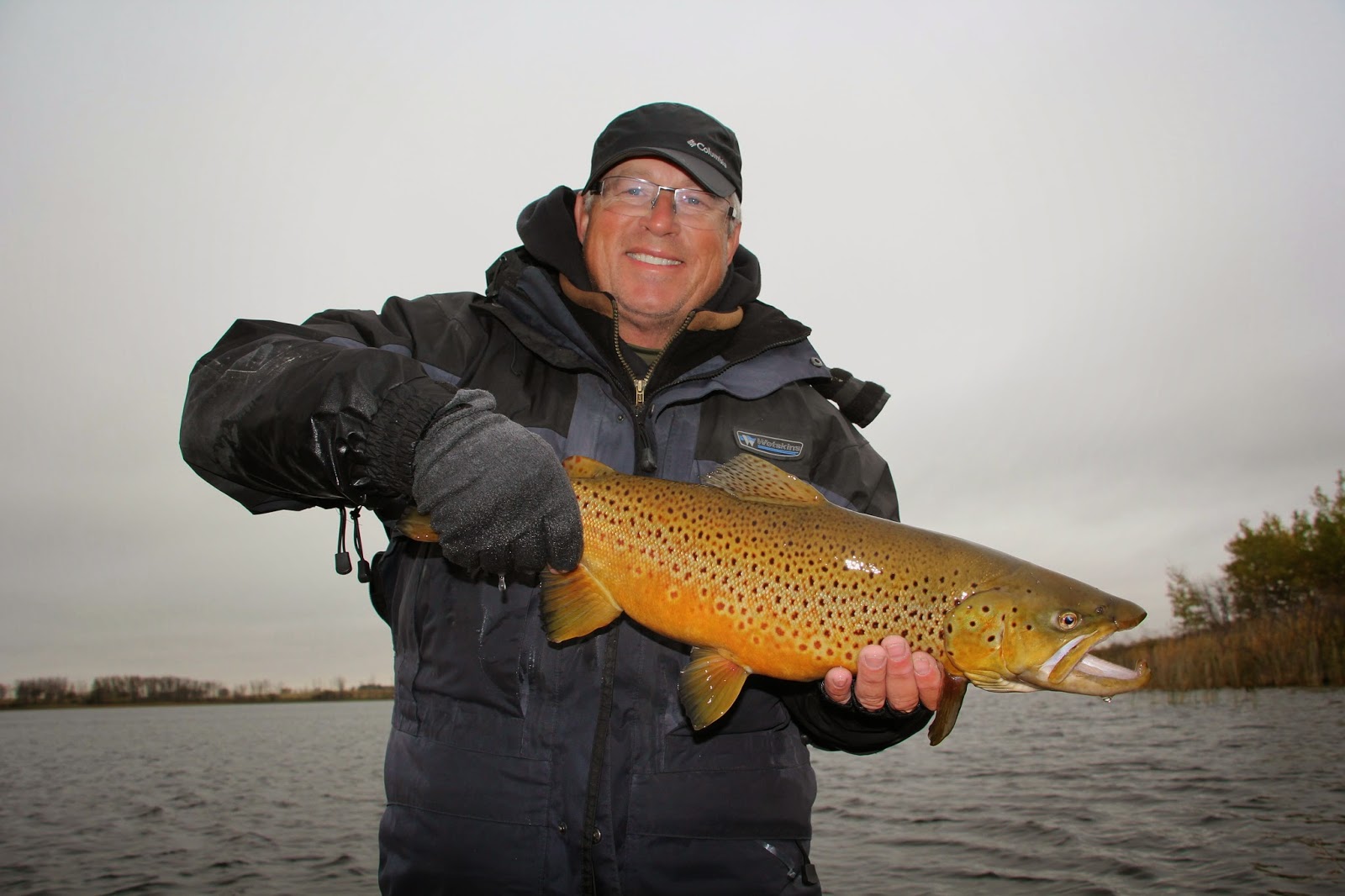 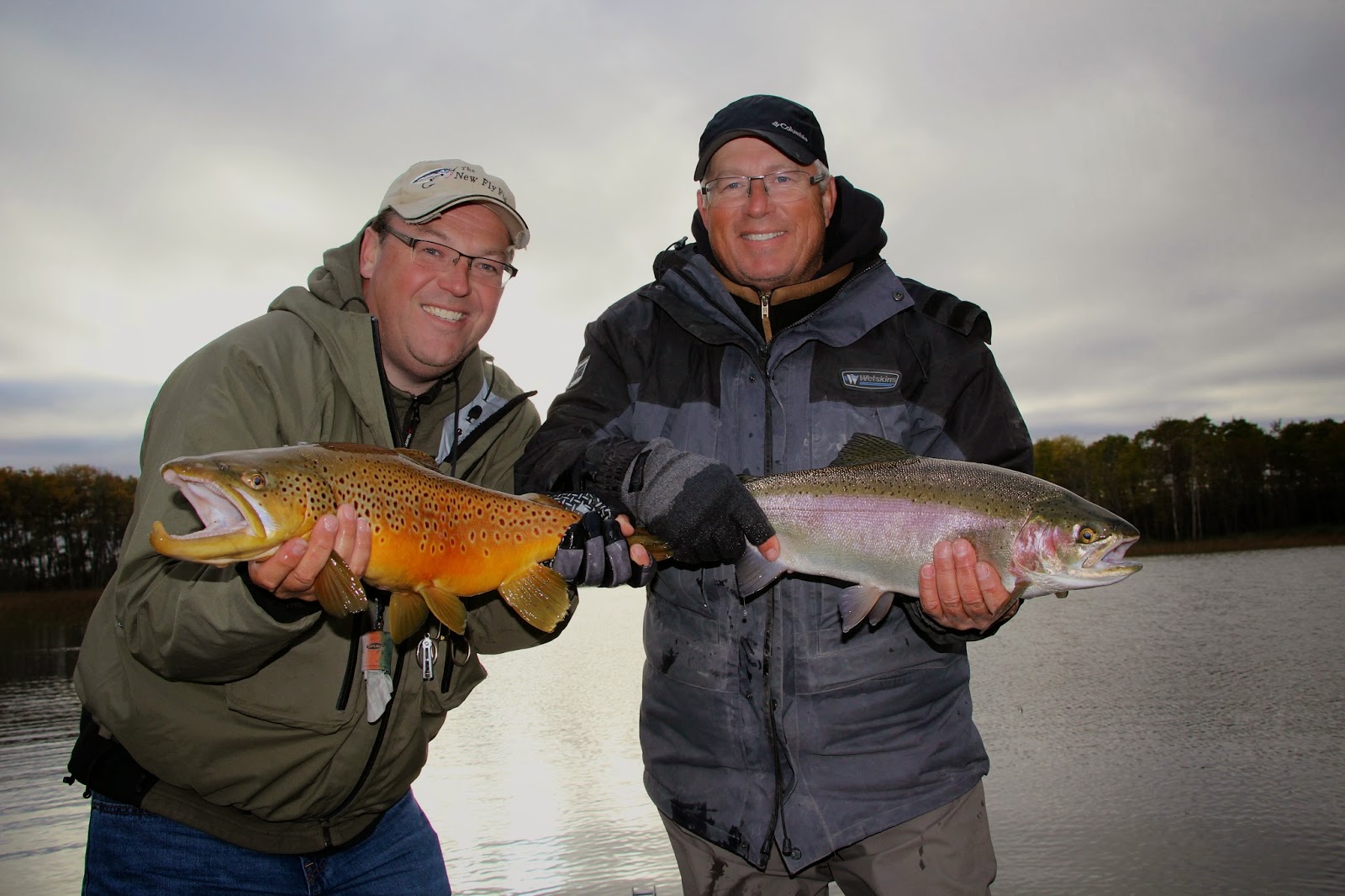 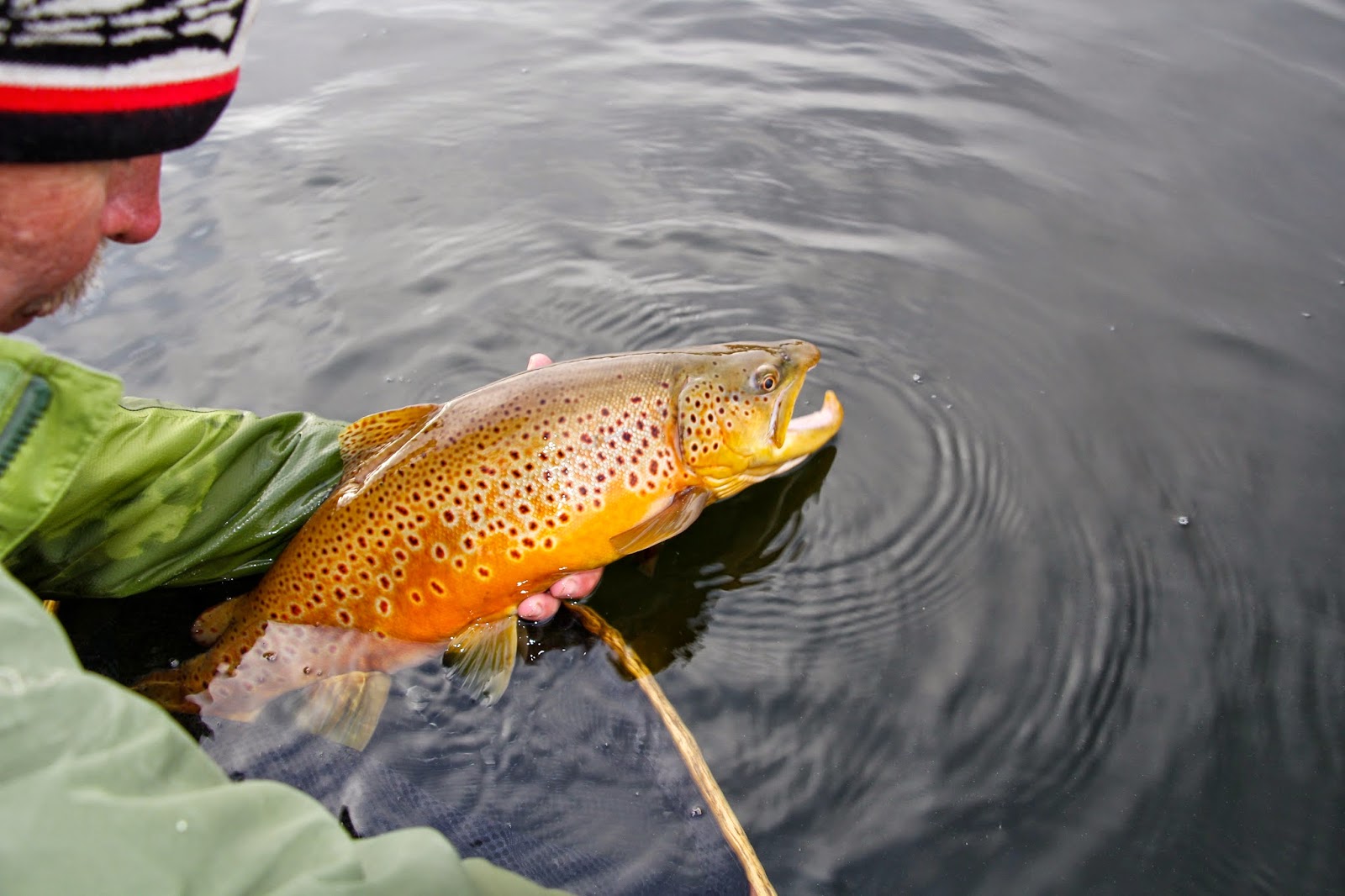 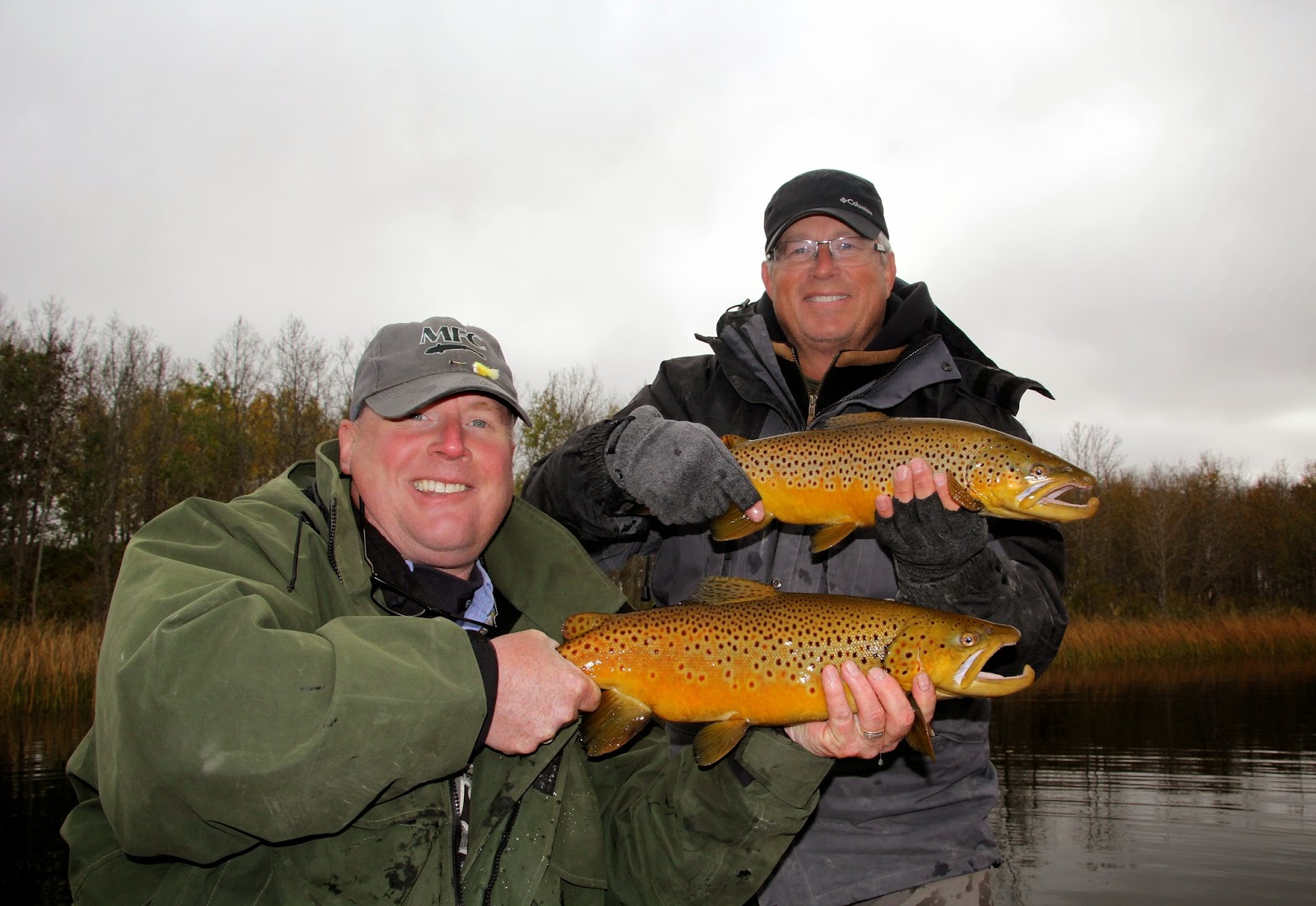 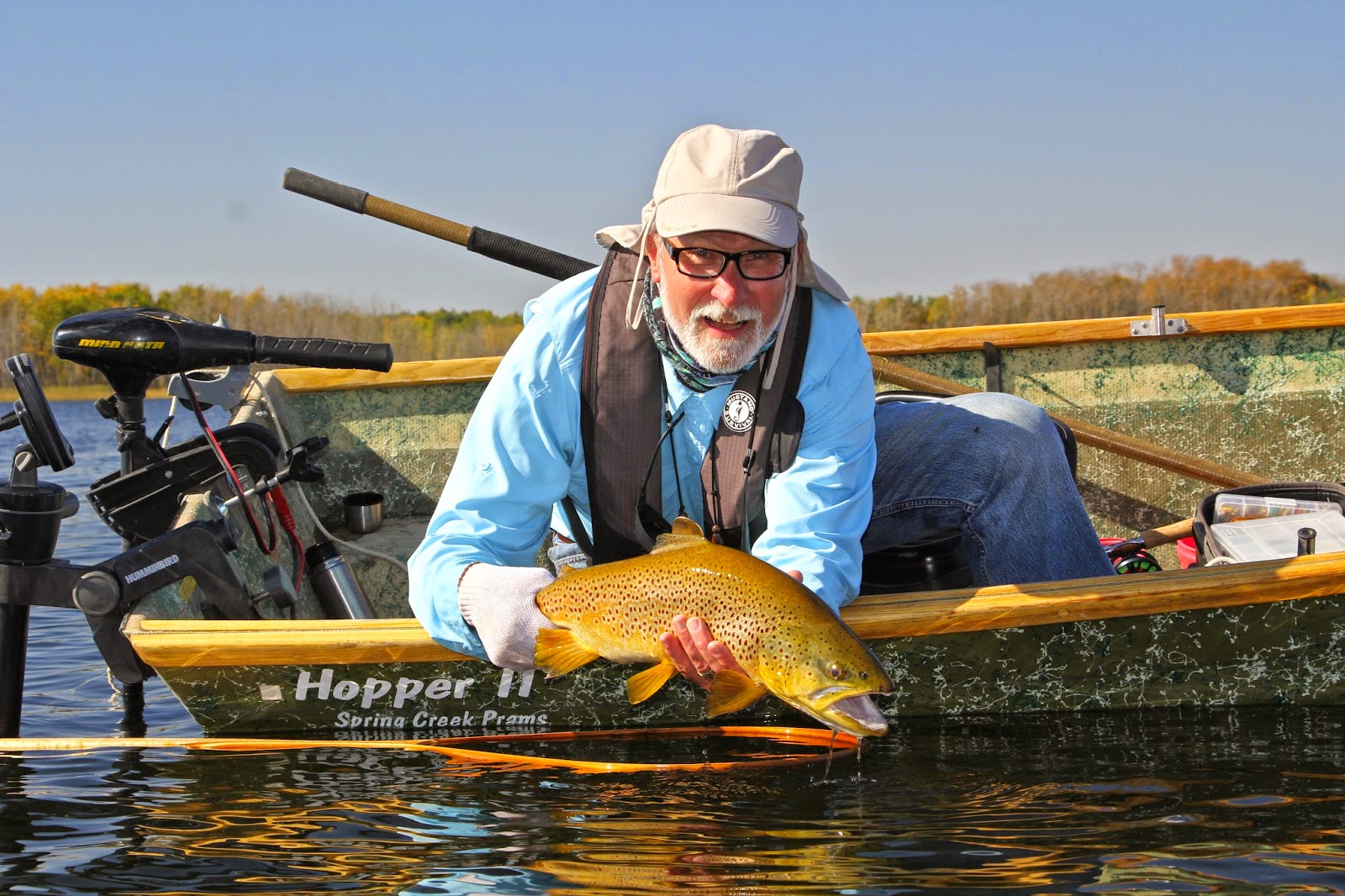 Posted by Bob Vanderwater at 9:02 PM No comments: