A Magnificent Moment for Bob Hanna

Pybus Lake was not giving up its trophy rainbows easily on Monday. A few guys hooked up only to be broken off or had their hook straightened. Later in the afternoon just before a thunderstorm was about to hit the lake, Bob hooked up over by the old farm in the south bay close to the boat launch. His Thunder Creek Minnow was slammed by something big, real big. The radio crackled and an excited voice from one of "The Army" let us know that Bob had a monster on. Bob took his time and he got the behemoth to his net. Phil Rowley immediately pointed his pram over to Bob to record these images. I was very excited for Bob. A great moment for sure. This rainbow was over 10 pounds and measured at very close to 29 inches. I think Bob said that he broke his lake rainbow record by 5 inches. That will be a record that will be tough to break. Wow!!!!!! 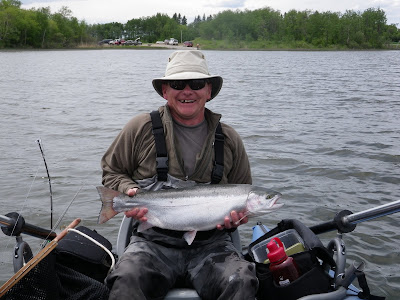 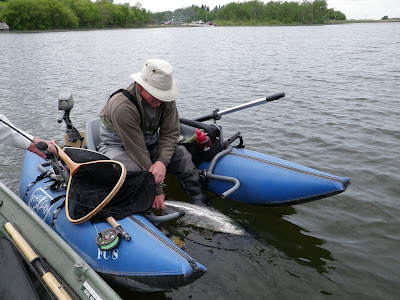 Bob took great care to ensure the rainbow was totally revived before he sent it on its way back into the depths of Pybus Lake.
Posted by Central Alberta Fly Tying at 6:58 AM