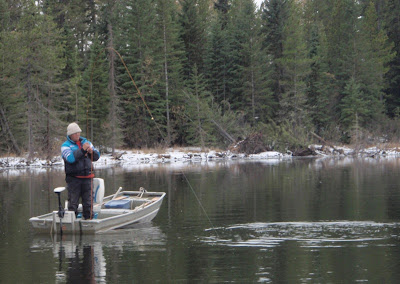 I recall speaking with Doug Cook at Beaver Lake in early November. Beaver Lake was already 50% encased in ice. We were still out there hanging leeches under indicators and catching some nice rainbows while adorned in our winter wear. I casually mentioned to Doug that he should consider leading a tying session. Well, tonight 25 tyers took in Doug's session. He taught us how to construct an articulated leech. The "bag" had 2 hooks, a rabbit strip, a cone head, 25 pound backing and a needle. Hmmm, this looks interesting. After a lot of steps that included sewing, gluing, measuring, and generally holding your jaw just right, the entire gang successfully tied this gigantic leech. The neat thing about this leech is the position of the hook at the back of the leech attached to 25 pound backing. The free flowing rabbit strip will certainly attract big fish. Once hooked, fish have no lever to help them get off. This pattern, I know, will spur some extra tying by the guys, Doug. Great job!
A special welcome to Tracey Birch. New tyers are always welcome.
Next week is our final tying session. Doug DeWitt is our final guest tyer of the season. Doug loves to construct small flies so bring your glasses! 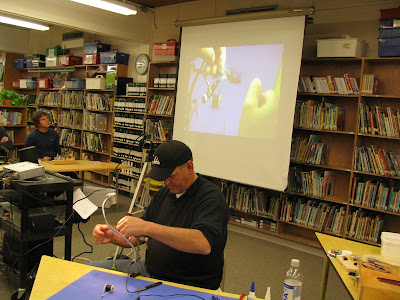 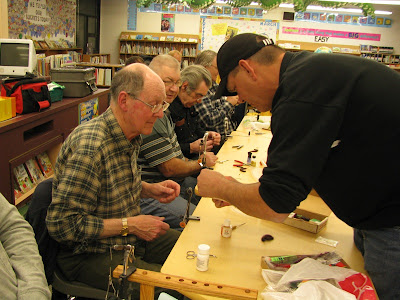 Phil, you just have to stitch the backing up the rabbit strip! Whhhaaatt?

Articulated Leech
Trailer hook: Mustad 3906B size 4 with the eye cut off
Front hook: Size 6- Mustad 37140 with the back half of the hook cut away
Body: Black or brown rabbit zonker strip
Cone: Large
Collar: Black or brown hackle
Sewing material: 25 pound white backing colored brown or black depending on the color of the rabbit strip
Thread: Black or brown 3/0
Posted by Central Alberta Fly Tying at 9:13 PM