Skwalas and a Brown Trout 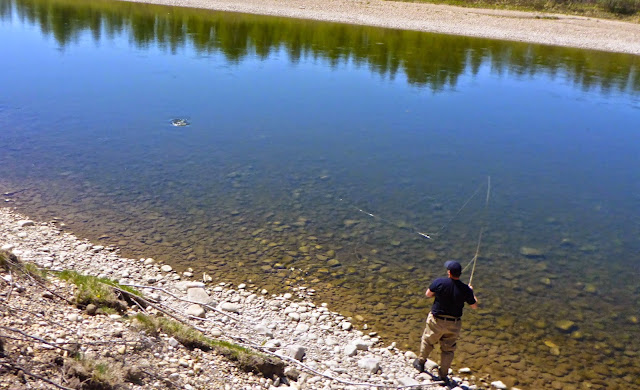 It looked like a slam dunk! My buddy Byron and I sat and watched this brown trout eat every skwala that came remotely close to him. He wasn't hugging a bank, he as you can see, was well out in the river greedily gulping down skwalas that seemed to be on a conveyor belt sliding down the Red Deer River. It was a bright sunny day which often can mean browns will be hiding until dusk but skwalas brought this less than cautious brown out to greedily feed on these big bugs.

We sat and watched to see if he was cycling, not really. I could see the brown sitting behind a smaller bolder. He would dart out to smash the skwalas.

Byron ever so slowly walked along the edge of the bank. I was directing him from the top of a high bank. Byron stripped off some line and delivered a perfect cast without lining the brown. The brown immediately saw the offering and swam right up to the imitation. He refused to eat it. Hmm, drag, I did not think so. Byron decided to recast, it again was an excellent presentation. The brown let it go by and then turned towards the fly. He slowly rose up to the imitation and hit it with his nose.

He turned back up stream and casually swam away.

The water was low and perfectly clear. The brown was in probably 2 feet of water. Did the brown see the line? Not sure. Maybe we should have used finer tippet or a different fly.

The brown didn't seem to be on high alert. We found out different!
Posted by Bob Vanderwater at 9:50 PM